North of the Cenderawasih Bay, between the Birdshead Peninsula and the eastern mainland of Papua, are the large Schouten Islands situated. The largest and most important islands of the Schouten Islands are Biak, Supiori, Yapen and Numfoor. Biak (together with Supiori formerly the Schouten Islands) is the most important one with an international airport and harbour. The southern part of Biak is cultivated, the northern part in majority undisturbed secundary and primary forests, with the Northern Biak Island Reserve as National Park. The city of Biak is the largest town on the island, other somewhat larger villages are Bosnik (the former Dutch capital city of Biak), Waroi and Korem. In 1996 Korem was stroke by a "tsunami", caused by a heavy earthquake, and for the greater part destroyed. Pictures below show the situation in Korem before this disaster, in 1993. The village has been rebuild but still, after more than ten years, the Northeast coast of Biak and Supiori show traces of tsunami destruction.

Biak attracts many tourists from Japan, USA and The Netherlands because of its war history. The American army and the Japanese invaders were in heavy combat at the end of Worldwar II. The Japanese hide themselves in the many natural caves at the south coast of Biak where they were trapped and slaughtered by thousands. Still many traces of this battle can be found in monuments, remains of tanks, landing ships, Jeeps, ammunition and, unfortunately, also remains of human bones (some are even sold to tourists). Just outside Biak City is a small museum where many of these remains can be found.

Supiori, northwest of Biak, with the rather undisturbed Supiori Island Reserve, has a small mountain ridge with the highest peak, Bonsupiori, with an altitude of 1034 meter. 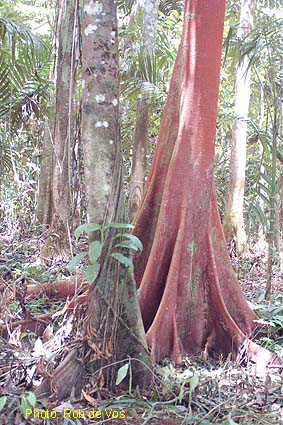 One of our visits in 2008 was on the northside of Supiori Island. Although a ring road around the island is being made, it was a pleasant surprise to us to see that most of the island is still covered by primary forest. Attemps are made to cut roads to the inside of the island but so far these are not yet numerous and far from complete. Of course it is just a matter of time until the island will be explored and cultivated, unless the official status of National Reserve. Therefore we should give logging and destroying the rainforest no chance and insist upon protection of the island's nature by the Indonesian government. 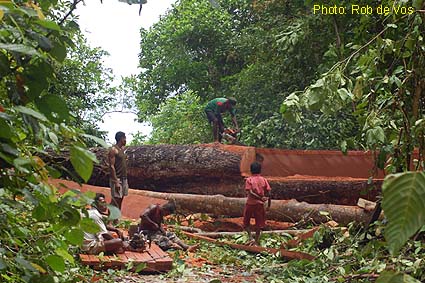 The northcoast of Supiori is dominated by Mangrove forests interrupted by some small villages settled at the coast. A totally new capital city has been build in the northeast which is still uninhabited, because people rather live in their familiar village with their own poor houses. 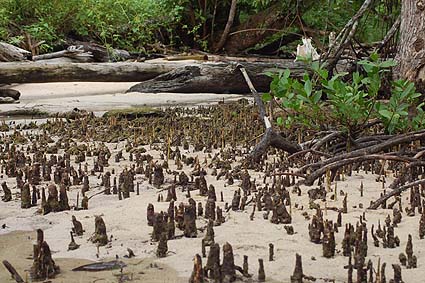 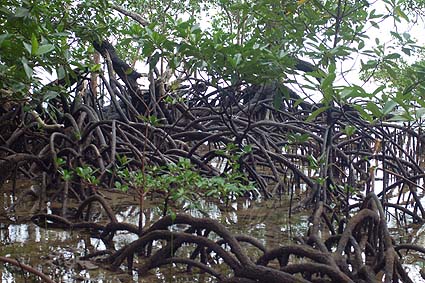 The insect life is still flourishing in the forests. Some conspicuous and common species are Ornithoptera priamus (Lepidoptera: Papilionidae), Eupholus magnificus (Coleoptera: Curculionidae) and Acherontia lachesis (Lepidoptera: Sphingidae). We were lucky to have Joop Schaffers with us on our trip, who is an enthousiast macro-photographer. Many of the insects seen during the day or attracted to light in the evening were captured with his camera, and when suitable also collected by us. 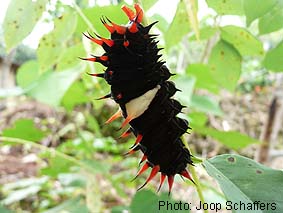 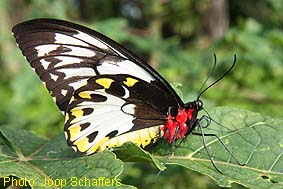 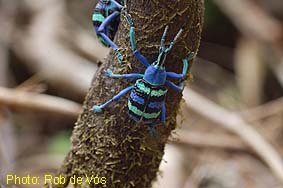 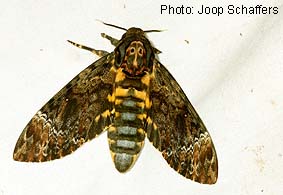 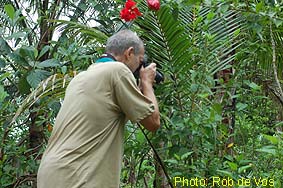 Numfoor is a rather shallow and relatively small island, with a small mountain, Meriukwari, of only 204 meter. There is still rainforest present.

“On biak, as on most islands out here, the commonest insects are Danaids and Satyrids. To the east, Appias and Catopsilia, particularly the former, were exceedingly common, i.e. for this part of the world. In South America forty to fifty Catopsilia in one sweep of the net is quite possible on a mule road. Such a take out here is an impossibility; four or five at once would be unusual. To the west, although the country is open and suitable to rapid-flying Pierids, the Appias and Catopsilia were conspicuous by their absence. In fact, speaking from the standard of most tropical islands, butterflies in general are rather rare on Biak.”
“The difference between the forms on Biak and their allies in New Guinea and Jobi (Jappen [= Japen]), as far as is known with regard to the latter island, is remarkable. The same applies to the flora. Further, there are no paradise birds, kangaroos, cassowaries, or hornbills, yet all these are plentiful on Jobi, not thirty miles away. Yet the Goura victoriae (crown pigeon), which is a particularly heavy bird and can fly only a very short distance, is quite plentiful. This bird may, however, have been imported from Humboldt Bay centuries ago when there was perhaps communication with the more eastern districts. There is a lighter strain in many of the natives and some even have straight hair. This points to some past connection with the natives of the islands at the other end (south-east) of New Guinea. Were it not for the fact that Biak is apparently new land, one might suppose that it belongs to a former continent or great island. According to a missionary, one part, a small mountain, shows signs of being of very ancient formation; this tallies with the native folk-lore."
“The formation of Biak is coral-limestone. There is anchorage on the south coast at Mokmen, but I believe none on the north. In places one can stand on the edge of the coral reef at low tide and sond without finding any bottom at sixty fathoms, as at Bosnek [= Bosnik] on the south-east corner."
“The prevailing wind is, of course, the south east. This is a trade wind and really blows all the year round, but what is known as the south-east monsoon blows from April to September. Then the north-westerly squalls begin."
“The altitude is not greater than 200 or 300 feet except in one part to the north, where a mountain runs up to 2000 feet. This, however, is not high enough to produce mountain forms."
“There are no swamps on the island, and behind Waridoon the west are undulating plains. Here, in patches of secondary growth, most of the Delias were found."
“One might stop a considerable time on Biak and get very few Delias. Perhaps a few euphemia males and, may be, both sexes of multicolor if one happenend to see the jambosa tree in flower on the sea shore. To get Delias, particularly the females, one must find the flowering trees which they haunt, and wait patiently in the branches during the sunny hours; 4 p.m. is a good time for females. During the great heat of the day most things are still except in the woods, where it is always possible to come across some females drinking. The female of euphemia is quite rare and very conspicuous; maudei is very rare indeed, and bosnikiana is yet rarer."
“Papilio felixi is found hovering over the mud near the shore. It is not at all common, but its habits are probably much the same as the other thule forms.”